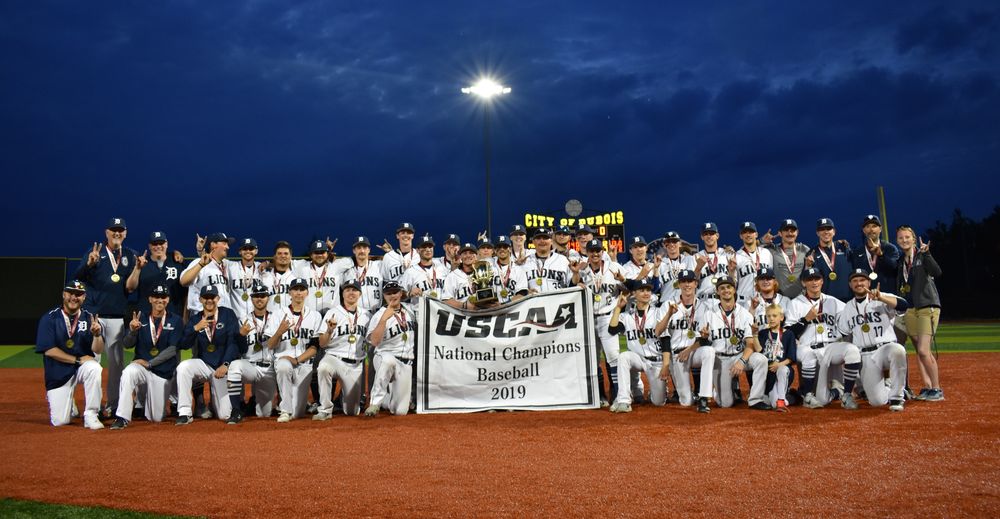 The pressure to win back-to-back titles in any sport is no small task, and tense is a word that best describes the feeling in the Penn State DuBois dugout prior to, and during game 1 of the 2019 USCAA World Series.  DuBois had to face off against a team they had a losing record against, but also a team that DuBois had just beaten in Bryant & Stratton. Luckily in this double elimination tournament DuBois had not lost yet, so to have their championship title stripped, Bryant & Stratton would have to beat DuBois twice.

The first game was all Bryant & Stratton Bobcats thanks to pitcher Zach Mattos. A tip of the hat went out to him from the entire DuBois team as he threw a complete game, four-hit performance off of 138 pitches. Mattos allowed only one run the entire game that came in the eighth off of Isaac Stouffer (Punxsutawney). Stouffer started the game from the mound, had two hits, and the lone RBI, but it wasn’t enough as the Bobcats would defeat DuBois 6-1 and force a final deciding game.

The Lions of DuBois knew they needed to come out and just play the game that they knew how to play in game 2. The Lions would be the visiting team on the scoreboard for this game, so they would get their chance to bat first. With a single from Vincent McDowell (West Branch) DuBois would put the first run of the game on the board as Lance Pennington (Punxsutawney) crossed the plate to make it 1-0. A second run would come with an RBI single from the bat of Brandon Gettig (Bald Eagle) as the Lions would take the field with a 2-0 lead.

Morgan Bell (Somerset) got the call from Coach Calliari to start the game from the mound. Bell struck out the first batter of the game, but would give up three runs in two innings as DuBois fell behind 3-2. DuBois would get two more runs however in the top of the third as McDowell blasted a home run to score himself and Pennington.

Brandon Orsich (Clearfield) came out on the mound for the third inning for DuBois, and had a three-up, three-down inning.  A scoreless fourth inning was due to a great defensive effort by both teams, and DuBois would hold their lead at 4-3. The fifth inning was a little different than the fourth had been for DuBois. With Stouffer, McDowell, and Gettig all on base, Toner Corl (Central Mountain) came to the plate. With one swing of the bat the game changed as Corl hit a shot over the right center field wall for a grand slam that put DuBois in the driver’s seat with an 8-3 lead.

The DuBois dugout was breathing a little easier now, and Orsich was in full command from the mound. A run by the Bobcats would score in the bottom of the fifth, and two more in the seventh, but DuBois would tack on some of their own runs as well. A Corl RBI in the seventh scored Thayne Morgan (Clearfield), and another three runs would score for DuBois in the eighth off of another McDowell home run, and a Corl double.

Orsich would go back in for the ninth inning and get one out before Coach Calliari would make a call to the bull pen to bring out Justin Orlowski (Grove City) for the final two outs. A ground ball hit to second base would do it, as second baseman Getting would flip the ball to Stouffer at first base to seal the deal and crown Penn State DuBois the 2019 USCAA World Series Champions for the second straight year.