Located in North central Pennsylvania; a commuter campus.  Since 1935, thousands of students have experienced the benefits of a major research University in the quiet atmosphere of a small-town setting.

In 1935, the DuBois Center of The Pennsylvania State College was started in four rooms of the Old Hubert Street grade school building. The faculty was composed of one part-time and four full-time instructors. There were only 42 students for the first semester, and the library consisted of only 437 volumes, most of them borrowed from the faculty.

As enrollment figures grew to 101 students in 1937-38, an encouraging development was realized from the generosity of the School Board and the heirs of the late John E. DuBois, Sr., who presented the center with the DuBois Mansion and four acres of land for the use of the budding institution.

Extensive repairs and improvements to this property were being made by the Works Progress Administration when the center was transferred to the DuBois Mansion in February 1938. With these greatly enlarged facilities, the center increased its admissions to 150 students, a number which was then considered the capacity of the school.

The outbreak of World War II in Europe created new problems and new demands on the services of Penn State's undergraduate centers, and an "accelerated program" was started by adding a summer semester in 1942. An Educational Defense Training program was also instituted in the form of evening classes for adults.

The DuBois Educational Foundation was incorporated in May 1945 as a non-profit corporation after a group of civic-minded citizens from the tri-county area had banded together for the purpose of keeping the center operating. With Patrick Joseph Swift as president, the foundation realized the need for enlarged facilities at "The Center." A successful fund drive was conducted to construct an additional wing on the Science Building in 1946, as well as a field house for student activities which was erected in 1948, mostly by staff labor.

When the DuBois Undergraduate Center reopened in 1946, the number of applicants soared to explosive proportions as a result of the war-time postponement of educational careers and the benefits of the GI Bill®. For the academic year of 1947-48, there were 390 students matriculated, 282 of whom were veterans.

Celebrating its 100th anniversary in 1955, Penn State officially became The Pennsylvania State University. Its extension centers in 1959 were designated as "Commonwealth Campuses" and the old "DUC" became known as the DuBois campus, honoring the family that donated this estate.

Also, in 1955, at the suggestion of the DuBois Educational Foundation, a two-year associate degree program was instituted at the DuBois campus, enabling many students from the area to enter specialized fields of engineering.

The DuBois Educational Foundation's campaign for funds in 1962 and the construction of the Swift Memorial Building offer positive proof of the interest and pride residents of the tri-county area have in their youth, as well as demonstrating their confidence and hope in the progress of Clearfield, Elk, and Jefferson counties. The building was completed in 1964 and was made possible by a fund drive that collected more than $500,000 from business and residents from that three-county area. The Advising Center, the Center for Undergraduate Excellence (CUE), the SAFARI, and Information Technology are located here, along with laboratories, classrooms, and faculty offices.

The Multi-Purpose Building, which opened in 1967, is the center of all athletic activities on campus and was funded through the General State Authority and along with the gymnasium, fitness room, and locker rooms, there are faculty offices, classrooms, and a physical therapist assistance laboratory.

The Donald S. Hiller Building, named after the Campus Executive Officer from 1951 to 1978, was available for student use in 1975. The Library, Bookstore, Auditorium, and Student Affairs Offices are located in the Hiller Building in addition to the Health Center, Student Government Association, and the Lion's Den Café.​

The 125th anniversary of The Pennsylvania State University occurred in 1980. The merger of the Commonwealth Campuses and the Continuing Education Administrations took place in 1982. The year 1985 marked the 50th anniversary of the DuBois campus as a growing part of the Commonwealth Educational System and as an important partner in service to the surrounding community.

In 1989, the DuBois Educational Foundation successfully concluded the DuBois segment of The Campaign for Penn State DuBois campus, a successful effort to raise $2 million in private support for the construction of a new academic building on the former site of the DuBois Mansion. The Mary Smeal Building is named in honor of Frank Smeal, who along with his wife Mary Jean, provided a lead gift for the campaign. The Smeal Building houses classrooms, art and music studios, faculty offices, a study lounge, and two technology-based learning studios. ​

Three houses adjacent to the campus were purchased, two of which have been converted to an Occupational Therapy Laboratory and office space.

Another addition to the campus is Symmco House, a DuBois family property, that was acquired in 1998 by the campus. It has been renovated as administrative offices through generous gifts from the Symmco Foundation and others.  It contains the Chancellor's Office, Human Resources, and the Business Office.​

The Workforce Development and Technology Center Building opened in the fall of 2004 and provides a home for Engineering and Information Sciences and Technology (IST) degree programs, Development, Alumni Relations, Marketing, and Continuing and Community Education. ​ The main floor houses a one-stop shop for students including Advising, Admissions (Adult, Veteran and International Students), Student Accounts, Financial Aid (Work-Study), Career Development and Registrar. Meeting and conference spaces are available for public use. The building was officially turned over to Penn State DuBois in 2018. This was made possible by a generous gift of the DuBois Educational Foundation (DEF). ​

The Fairman House was purchased in 2008 and renovation was completed in 2012. It provides space for campus honors programs and is open to honors students who may use the space to study, work jointly on projects, host seminars or guest speakers.  Purchase and renovation of the house was made possible by the generous contributions of private donors, such as those at the Fairman Family Foundation.

Today, Penn State DuBois offers nine associate degrees, seven complete baccalaureate programs, and the first two years of some 160 baccalaureate degrees that can be completed at University Park, elsewhere in the Penn State system, or at other colleges and universities. The campus has a bright future as it continues its mission of providing a quality education close to home for the greater DuBois area and the multi-county region it serves.

"GI Bill®” is a registered trademark of the U.S. Department of Veterans Affairs (VA).  More information about education benefits offered by VA is available at the official U.S. government website at www.benefits.va.gov/gibill." 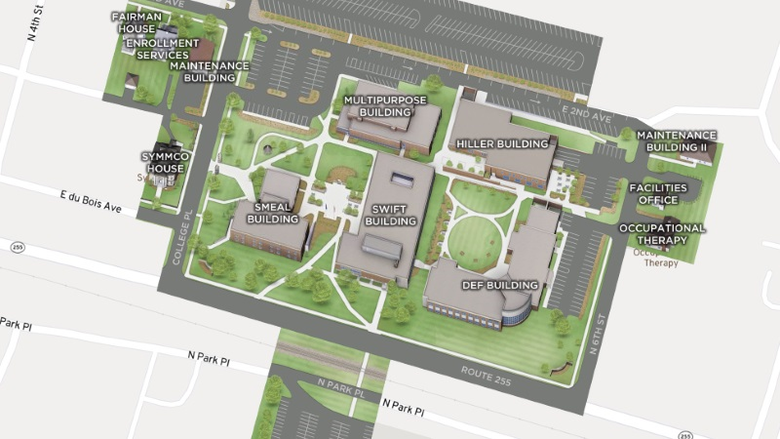