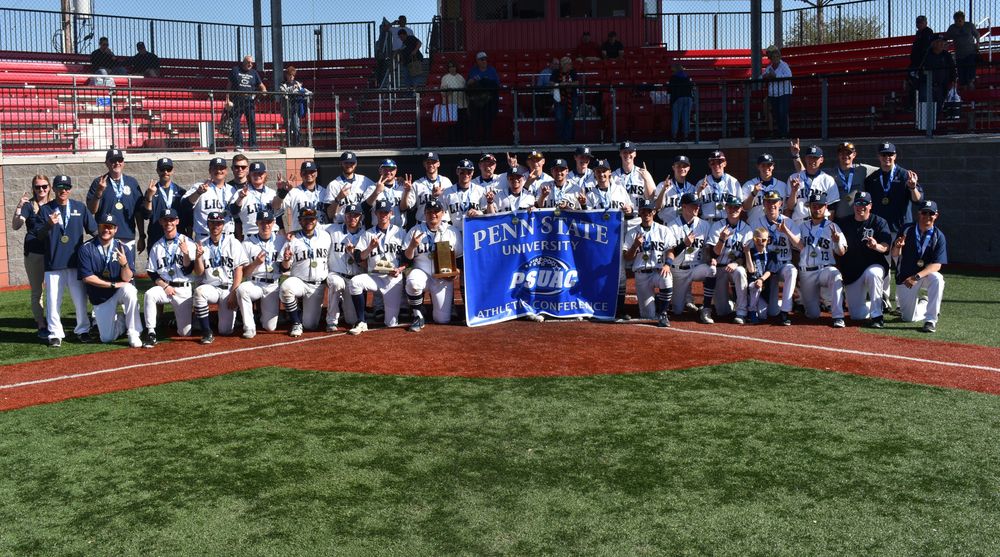 The Pennsylvania State University Athletic Conference (PSUAC) held its 2019 Baseball Championship Tournament this past weekend at Showers Field.  Penn State DuBois came into the tournament holding the No. 1 seed in the Western Division. DuBois first game would be against the No. 3 seed from the east, Brandywine.

Hitting – Lance Pennington (Punxsutawney), Isaac Stouffer (Punxsutawney), and Vince McDowell (West Branch) each had a home run and 3 RBI’s to pound out the runs for DuBois. As a team, DuBois had 12 runs on 10 hits, and drew nine walks in the game.

Pitching – Brandon Orsich (Clearfield) threw 3 1/3 innings in the start for DuBois. Orsich faced 19 batters, gave up six hits, and allowed only three runs. Logan Johnson (Penns Valley) came in for 2 2/3 innings of relief work giving up only three hits on 12 batters. Justin Orlowski (Grove City) and Jake Sorbera (Clearfield) would finish out the final innings of the game to give DuBois the win in this second round of the PSUAC double elimination tournament, 12-6.

In game 2, DuBois found themselves facing the No. 1 seed in the east, Penn State Wilkes-Barre.

Hitting – McDowell had another big game from the plate as he smashed two home runs over the wall for three RBI’s. Pennington followed suit with another one of his home runs as he ended the game with four RBI’s. Clayton Butler (Central Mountain) and Brandon Gettig (Bald Eagle) each had two doubles, and Thayne Morgan (Clearfield) stole three bases in the game.

Pitching – Austin Amacher (Ridgway) got the start from the mound for DuBois. Amacher pitched 3 1/3 innings giving up four runs off of seven hits. Morgan Bell (Somerset) and Adam Armstrong (Bellefonte) came in as Amacher’s relief to finish off the game, and to cap off the victory for DuBois as they defeated Wilkes-Barre, 15-5.

Hitting – Pennington owned the plate in this tournament, and this game was no different. In his first at bat of the game, bases loaded, Pennington crushed a grand slam over the right-center field fence. In his second at bat, the bases were loaded again as he came to the plate. Hitting it in the same direction, the ball came just a few feet short of his second grand slam of the game as it hit the top portion of the wall, and bounced back into play. Stouffer and McDowell would drive in two runs apiece as DuBois would total 15 runs on 12 hits as a team.

The combination of power hitting, and efficient pitching gave DuBois the win, 15-2. DuBois would win the PSUAC Championship for the second straight year, and would later find out that they earned a No. 3 seed in the 2019 USCAA National World Series Tournament. DuBois will play the No. 6 seed, Southern Maine at 6:30 p.m. on Monday, May 13.