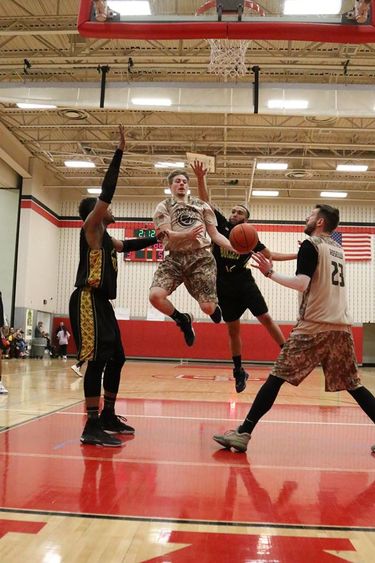 DUBOIS, Pa. -- Two former Penn State DuBois basketball players are on their way to Los Angeles to play for millions this week. Tristan Pierce and Sam Roselli both joined the DuBois Dream after graduation, where they've had the opportunity to continue playing the sport they love on a professional, minor league level. The Dream has been selected to participate in ESPN's "The Basketball Tournament" (TBT) running this weekend in Los Angeles, California. Overall, 72 teams compete in the tournament, from 18 regions nations-wide. The winning team takes home a $2 million prize. If the Dream should win, the team plans to donate the money to local charities they support, including Grady's Decision, the Dr. Albert Varacallo Foundation, and The Arc of Jefferson and Clearfield Counties. They also hope to raise money for a new team gym and to launch a youth basketball program.

"This is actually where the DuBois Dream started, in TBT, back in 2016," said DuBois Dream General Manager Albert Varacallo. "I chose Tristan and Sam to be a part of the DuBois Dream to compete against the top-level talent in TBT, because they are good players, good people, and are local talent coming from PSUD that are dedicated to helping this team succeed. They did a great job getting votes to help us qualify for TBT so they definitely deserved to be on the roster."

"It feels awesome to be playing in a such a high stakes tournament, and never knowing whether or not I'd have this kind of opportunity growing up only makes it that much better because it gives me a chance to keep playing and motivates me to keep working harder for more," Roselli said. "I've spent all summer in the gym preparing for the tournament so I can put my team in the best possible position I can to win, and plan on taking it one game at a time. It's been amazing to have the opportunity to play basketball beyond the college level and even more rewarding to be able to be the best person I can be for Dream fans and other kids in the community."

Pierce added, "It is amazing to be a part of a tournament playing against teams with ex-NBA players, top college players from the past, and also European players. It will be a fun experience to showcase my talent."

"The tournament will feature more than 60 players with NBA experience, 27 college alumni teams and elite overseas professionals from leagues around the globe," Varacallo explained. "The DuBois Dream plays our usual minor league basketball season from December through April, but TBT provides a national stage for us in the offseason to compete against some awesome talent on a national stage on the ESPN Network and help us spread the word and shine the light on some great causes."

Both players say they're grateful for the chance they've had to continue playing basketball after graduation, though going pro does come with some adjustments. Pierce said, "It was a change because now every team you play against has height and strength. Defending is harder because of the offensive three second rule so there is more spacing. Defending would probably be the biggest change for me because in this league you can play great defense but there are great scorers that can score with great defense played on them. He added, "So, I am just learning and now adapting to the competition and no matter how tall the other team is I am competitive and will try and win."

Roselli said, "The adjustment from college to playing for the Dream was quite a leap, as the speed and physicality of the game increases exponentially. You also have to understand that everyone at this level was also a standout in college and just being "good" isn't enough without putting in the work.  Luckily for me, my transition from college to the Dream went as great as it could have because I was surrounded by great teammates and a great community! As far as what prepared me to play at this level, I can thank all my past and present coaches and teammates who always helped push to make me better and work harder. They always taught me that your team is family, and you'll do anything for your family, and as with everything in my life, knowing that God is always on my side has made this whole experience the best it could be"

"What a great opportunity for Sam and Tristan to continue to play competitively after college, as well as a chance to be part of a great organization like the DuBois Dream," Howard said. "Both Sam and Tristan have put in many hours in the gym throughout the years which have led them to this success. The DuBois Dream have physically talented players in Sam and Tristan, but also good young men that are leaders and involved in the community."

The Dream's first game in TBT is slated for Friday, July 13. It will be televised on ESPN 3. For more information, or to follow the tournament the team during the tournament, visit http://www.thetournament.com/teams/dubois-dream