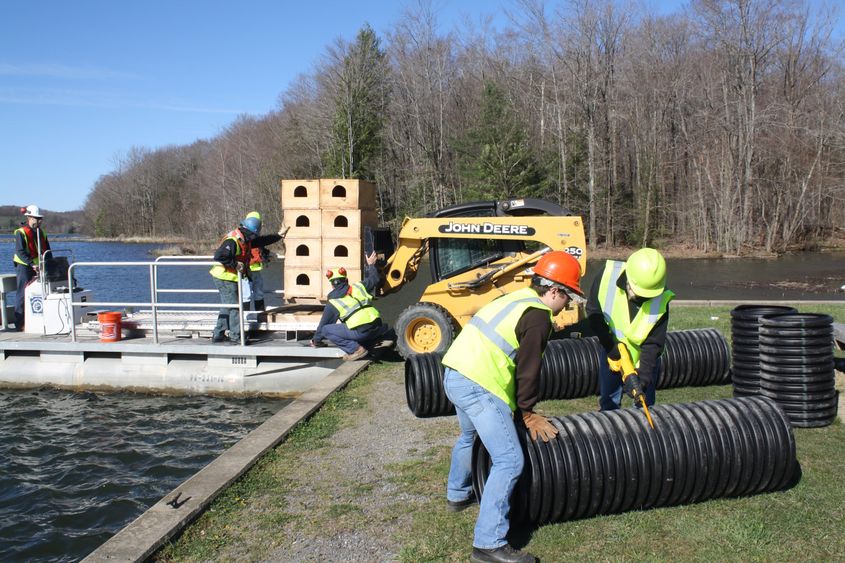 In front, left to right, Penn State DuBois Wildlife Technology Students Alec Baker and Teanna Kobuck cut section of corrugated pipe to be used in the construction of catfish spawning boxes, as other sections of the artificial habitat are loaded onto a pontoon boat behind them.

DUBOIS, Pa. — Efforts to sustain and increase wildlife species at an area lake are picking up this spring with a great deal of help from students in the Penn State DuBois wildlife technology program.

The students have partnered with the Pennsylvania Fish and Boat Commission and the Jefferson County Conservation District to provide habitat development at Kyle Lake, a man-made body of water located in Washington Township, Jefferson County. On Wednesday, April 20, the students helped Fish and Boat Commission workers place catfish boxes and turtle basking platforms in the lake. Both will provide necessary components of the habitat that are needed for these species to thrive.

"This was historically a great catfish fishery," said Mike Swartz, a Fish and Boat Commission habitat manager and alum of the Penn State DuBois wildlife technology program. "But something happened. Natural reproduction stopped. So, we are trying to create a good fishery again by providing artificial habitat."

The habitat they're providing are spawning boxes that create an environment the catfish require for natural reproduction.

"Fish like bass and perch don't need a special place to spawn, but catfish need a cavity," Swartz said. "They need a cavity to spawn and leave their eggs where they're protected from predators and the environment. If they don't have that, it just won't work."

The spawning boxes are placed in the water at 3- to 5-foot depths, Swartz added.

The basking platforms for painted turtles were built on campus at Penn State DuBois in September and are now being placed at Kyle Lake.

The wooden structures will float on the water's surface, but they will be tethered in place to blocks dropped on the lake's bottom.

"Turtles eat, then they climb out of the water and bask in the sun. They need this to thermo-regulate," said Swartz. "These also help the turtles avoid predators by giving them a place to bask out in the middle of the lake, instead of them being forced to go to the shore."

Swartz said Kyle Lake has long been a popular recreational area, and a decline in some species of fish and wildlife in recent years has resulted in decreased recreational opportunities, such as fishing. Declines are attributed to the fact that it is a man-made lake, lacking some of the habitat characteristics of natural lakes. Current efforts are aimed at changing that.

"This is the first year of a five-year project including the turtle platforms, catfish boxes and more," Swartz said. "It seems like some populations have gone down, and we're trying to get that back up and keep the anglers happy."

Funding for the project has been provided by the Redbank Trust and distributed by the Jefferson County Conservation District, with the Fish and Boat Commission and Penn State DuBois students carrying out the work at the lake thanks to that support.

"We're just so happy to see the work to benefit the habitat and better Kyle Lake that will create more opportunity for recreation," said Shawn Wessel, district technician with the Jefferson County Conservation District.

"I'm so happy the students get to see these conservation partnerships in action," said Keely Roen, senior instructor in wildlife technology. "This is a real-world application of what they're learning in the classroom. That's what we do; that's what the wildlife technology program is all about."

The real-world experience this project offers is something the students are grateful for. Anna Lindemuth, of Tidioute, and Samantha Stahr, of St. Marys, are both students in the wildlife technology program who worked at Kyle Lake on Wednesday. They will also complete internships this summer with the Pennsylvania Fish and Boat Commission monitoring the catfish boxes they've helped put in place. The interns will log how extensively the boxes are used by fish, as well as the overall success of the project in terms of spawning rates. They'll place GoPro cameras in the boxes in order to best monitor the fish with minimal intrusion to their habitat.

"I personally love the hands-on experience," said Lindemuth. "Getting to also do an internship that is hands-on and to be able to put that on my résumé is just fantastic."

"It's just incredible," Stahr added. "I never would have dreamt I'd have experiences like this in college, or in my life."

The impact students are able to have on their world is also not lost upon them.

"This feels very important," Stahr said. "It's especially important in these small towns and small areas like this. It's a great way to get information out to people and inspire them to join in the work."

Kyle Lake is a 165-acre body located just off of State Route 830, outside of the town of Falls Creek.