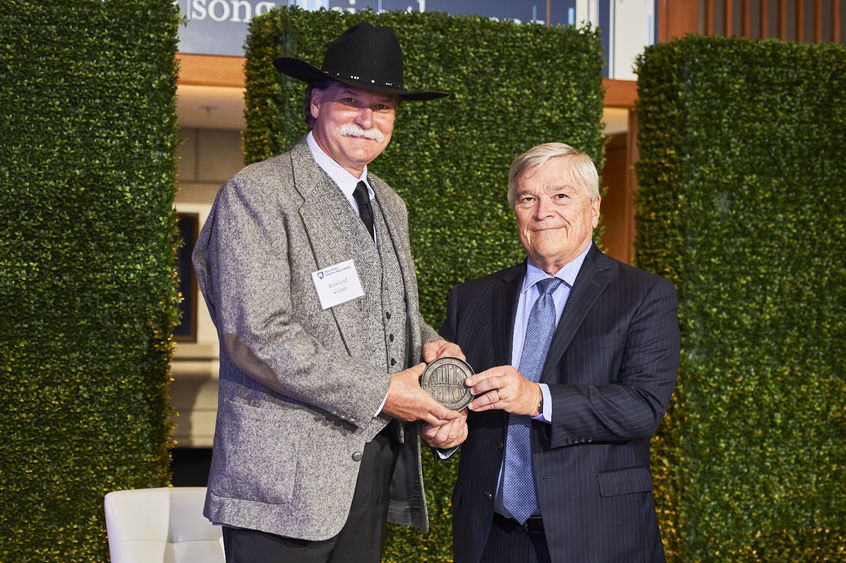 UNIVERSITY PARK, Pa. — Rawland Cogan, a graduate of Penn State DuBois and president and CEO of the Keystone Elk Country Alliance, has been named a 2021 Penn State Alumni Fellow. He was nominated for the award by Penn State DuBois.

The Penn State Alumni Association honored 22 Penn Staters on Oct. 6 with the Alumni Fellow Award, the highest award given by the Alumni Association. Since 1973, the Alumni Fellow Award has been given to select alumni who, as leaders in their professional fields, are nominated by an academic college and accept an invitation from the president of the University to return to campus to share their expertise with students, faculty and administrators.

In 2009 Cogan created and managed the Rawley Cogan Consulting Business, the purpose of which was to fundraise and provide project management for the completion of the Elk Country Visitor Center. His business and consulting firm, which was under contract with the Pennsylvania Parks and Forests Foundation, worked directly with the Pennsylvania Department of Conservation and Natural Resources to complete the Elk Country Visitor Center.

From 2002 to 2009 Cogan was an integral part of the Rocky Mountain Elk Foundation (RMEF), serving as development officer and lands program manager. He represented the organization from both a regional and a national level as he expanded the mission of conservation.

Cogan began his very distinguished career with the Pennsylvania Game Commission (PGC), where, from 1982 to 2002, he held various positions, including serving as a deputy wildlife conservation officer, wildlife technician and wildlife biologist. He culminated his career with the PGC by holding the prestigious position of state elk biologist.

Cogan has authored a large number of articles and research reports, which have appeared in many conservation, outdoor, research, and professional magazines and periodicals. He has made guest appearances on such television programs as "Pennsylvania Outdoor Life," "Outdoor Journal," and "Jack Hubley’s Wild Moments."

Cogan, a life member of both the Keystone Elk Country Alliance and RMEF, also is a member of the National Rifle Association, Safari Club International, and the Eastern Chapter Foundation for North American Wild Sheep. Throughout his life he has been the recipient of many conservation-based awards from such foundations and organizations as the RMEF, C. Ted Lick Conservation Foundation, and the Pennsylvania Game Commission. He also has been honored by the Pennsylvania Senate with its Special Recognition Award and by Penn State with the David T. Wanlass Wildlife Award.

Cogan and his wife, Lana, are members of the Penn State Alumni Association. They reside in Weedville, Pennsylvania, and are the proud parents of two sons, Cody and Jess.