DUBOIS, Pa. — Longtime campus supporter Charles Snapp has made a $50,000 gift in support of the North Central PA LaunchBox Powered by Penn State DuBois. This gift will double thanks to a matching program offered by Penn State, resulting in the $100,000 Charles E. Snapp LaunchBox Endowment. 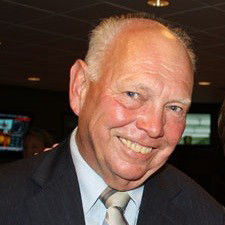 Penn State will match up to $1 million raised locally at DuBois to create a $2 million endowment that will keep the LaunchBox funded in perpetuity. Funding from the endowment will be used to support the North Central PA LaunchBox and Innovation Collaborative, programming and activities.

“When I was informed about the LaunchBox Project a few weeks ago, I became interested because I’ve been concerned about the progress by several agencies trying to encourage new business enterprise startups in this part of Pennsylvania,” Snapp said. “After meeting with officials of the Penn State DuBois LaunchBox project, I became encouraged that this effort to coordinate the work of those various agencies might result in new initiatives by individuals to bring businesses to this area. The fact that this project provides the possibility of initial funding for new businesses also caught my attention.”

Snapp continued, saying, “I decided to do my small part to provide some initial funding to the Penn State DuBois LaunchBox project. I have high hopes that the people working together under the LaunchBox initiative will result in new businesses and additional jobs in north central Pennsylvania.”

The North Central PA LaunchBox and Innovation Collaborative also will include an entrepreneurship center with office, meeting and flexible co-working spaces where staff and existing providers can be housed, and clients can collaborate to advance their ideas and initiatives. In addition, there are plans for a makerspace to support research and development and a light-industry incubator to foster innovation in manufacturing, including educational programming and workforce development training for advanced powder materials, additive manufacturing, and associated industries and startup businesses.

To support this cause, contact Director of Development Jean Wolf at 814-372-3038 or [email protected].

This gift will advance "A Greater Penn State for 21st Century Excellence," a focused campaign that seeks to elevate Penn State’s position as a leading public university in a world defined by rapid change and global connections. With the support of alumni and friends, “A Greater Penn State” seeks to fulfill the three key imperatives of a 21st century public university: keeping the doors to higher education open to hard-working students regardless of financial well-being; creating transformative experiences that go beyond the classroom; and impacting the world by fueling discovery, innovation and entrepreneurship. To learn more about “A Greater Penn State for 21st Century Excellence,” visit greaterpennstate.psu.edu.