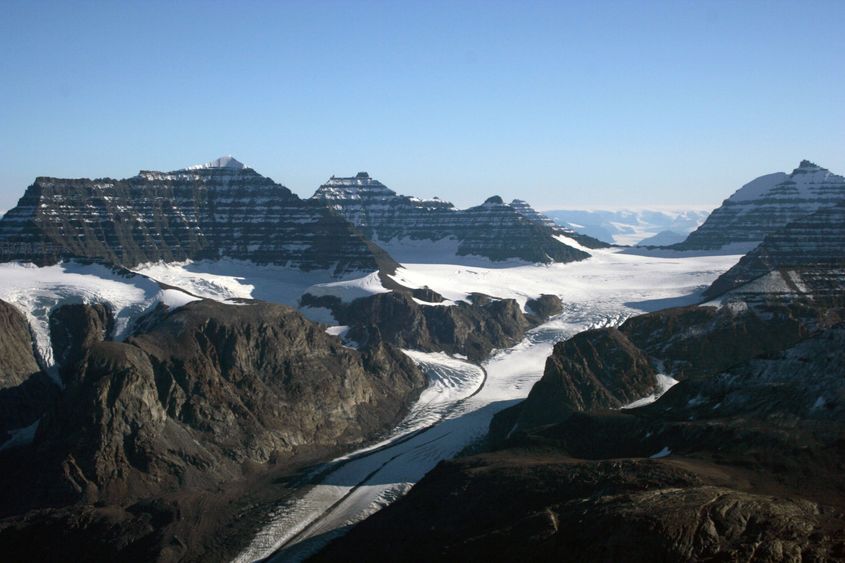 Glaciers and lava flows, east Greenland.  The layered rocks in the high peaks formed when the Iceland hot spot broke through after passing beneath Greenland. The main ice sheet is visible in the distance.

UNIVERSITY PARK, Pa. — The Greenland ice sheet melted a little more easily in the past than it does today because of geological changes, and most of Greenland's ice can be saved from melting if warming is controlled, says a team of Penn State researchers.

"There is geologic data that suggests the ice sheet was more sensitive to warming and temperature variations in the past million years, and not so much in the more recent past," said David Pollard, research professor in the Earth and Environmental Systems Institute at Penn State.

Too much warming will cause Greenland to lose most or all of its ice over the coming centuries, but most research indicates that the threshold warmth for complete ice loss has not been reached yet.

Paleoclimatic records indicate that most of Greenland was ice-free within the last 1.1 million years even though temperatures then were not much warmer than conditions today. To explain this, the researchers point to there being more heat beneath the ice sheet in the past than today.

Data show that when the Iceland hot spot — the heat source that feeds volcanoes on Iceland — passed under north-central Greenland 80 to 35 million years ago, it left molten rock deep underground but did not break through the upper mantle and crust to form volcanoes as it had in the west and east. The Earth's climate then was too warm for Greenland to have an ice sheet, but once it cooled the ice sheet formed, growing and shrinking successive with ice ages.

"The idea is that the loading and unloading, flexing and unflexing from ice ages tapped into slightly melted rock that was left deep under Greenland by the Iceland hot spot and brought that melt up," said Richard Alley, Evan Pugh University Professor of Geosciences at Penn State.

Changes to the ice sheet allowed the molten rock to move closer to the Earth's surface, even to the base of the ice. The hotter bed melted more ice from below, lubricating the ice sheet so it was thinner and easier to melt from above.

The melted rock wants to come up, according to Alley. As the ice sheet grows and shrinks, it essentially shakes the melt, drawing it up in pulses.

"The first shakes usually do the most moving," Alley said.

The effect would have been largest when the first big ice sheet grew and then shrank, he added. More recent changes to the ice sheet also affect geothermal fluxes, but not as much as they had in the past.

"The hypothesis does not change the reality that if we make it hot, Greenland's ice melts, and no one will like that," Alley said. "It does not even really tell us whether geology just at this moment is making it harder or easier for the ice to melt. The ability of the ice to melt got easier in the past and is sort of bumpily getting harder, and we do not know where on the bumps we are."

Pollard tested the team's hypothesis using a numerical, three-dimensional ice-sheet model. The researchers report their results in the Journal of Geophysical Research in January.

"The Greenland ice sheet is very likely to melt a lot and retreat, and contribute to sea level in the next few centuries," Pollard said. "This study is part of the puzzle of figuring out how much it will melt and retreat. We are using past geologic data to validate the models that are being used for the future."

If Greenland's ice sheet were to completely melt today, global sea levels would rise nearly 23 feet and flood coastal areas. Parts of cities like New York would be underwater. The team says future studies should integrate geologic and geophysical data as well as glaciological, atmospheric, oceanic and paleoclimatic information to better project how much and how fast the ice sheet will melt and its effect on sea-level rise.

"If you had a better idea of how much and how fast sea level rises from warming, you could make wiser decisions," Alley said. "This research is a piece of the effort to provide policymakers and planners with the background information that will allow them to make good decisions."