Rob Loeb, professor of biology and forestry, and recent graduate Taylor Walborn revisit the maps and documents used during their urban forest research project conducted when Walborn was a student at Penn State DuBois. The results of their research appear in this month's issue of the Journal of the Torrey Botanical Society.

DUBOIS, Pa. — A research project focused on the estate properties of Thomas Edison, Theodore Roosevelt and Frederick Vanderbilt is aimed at preserving the historic forest as it was when the estate's original owners inhabited these properties.

Robert Loeb, professor in biology and forestry at Penn State DuBois, along with recent graduate Taylor Walborn, co-authored a paper, "Conservation of three historic forest landscapes in the New York Metropolitan area," which appears in the April issue of the Journal of the Torrey Botanical Society. Walborn participated in the research while she was still a student at the campus.

Additionally, in their research the pair had the opportunity to leave an impact on the legacy of three well-known historical figures.

The Journal of the Torrey Botanical Society is the oldest botanical journal in America. The journal publishes all areas of research in plant biology with the goal of discovering and preserving scientific knowledge about plant species.

Loeb's research is aimed at preserving the historic forest as it was when the estate's original owners inhabited these properties, by assuring that the appropriate species of trees continue to thrive there, and that invasive species do not take hold, he said. Fortunately, detailed maps exist of the historic forests, with tree species documented.

"The owners of these estates were people of great historical significance, and all internationally renowned in their own rights. They took tremendous interest in the landscape and were really dedicated to enhancing the forests," Loeb said, explaining why the forests were carefully mapped. "In one sense, they were shaping landscape architecture in the United States by putting their own influence on these forests. The Vanderbilt estate was a model for future American landscape architecture. Inspiration for the landscapes of Central Park in New York and Fairmount Park in Philadelphia was born at the Vanderbilt Estate a century earlier."

Loeb's work helps the National Parks Service to perform the appropriate maintenance at these sites, providing them with information on what tree species should be planted to replace trees that have died, and which species should be removed from the forest.

"The NPS is doing very well," he said. "These are old-growth urban forests, and age catches up with the forest and we lose trees. The urban setting is hard on them. The NPS has been dutiful in keeping up with the forest changes. I hope the research helps them get more support in maintaining the landscape the way these great historical figures envisioned it."

With the Vanderbilt property sprawling over 85 acres, the Roosevelt farm occupying more than 33 acres, and the Edison estate at over six acres, data collection and tree surveys took a great deal of time, according to Loeb. It also resulted in an enormous amount of data to process and record. Fortunately, that's where Loeb had some help come to him in 2015, in the form of student Taylor Walborn. As a wildlife technology major, Walborn was interested in participating in undergraduate research in a subject she was passionate about. She couldn't believe the opportunity to get involved could come so easily.

"I walked into his [Loeb's] office and asked how I could get involved and he just said, 'give me a day,'" Walborn said. "That was it. I got started with him. It's pretty awesome as an undergraduate student. Not a lot of people at other schools get that opportunity. Here, I just had to ask a question."

Walborn poured over the maps with Loeb, complied data and ran data analysis, helping to compile the paper.

"Historically, and environmentally, it was really neat learning about this kind of conservation. Plus, I not only have a degree, but I also have an academic publication now," Walborn said. "I'm still trying to wrap my head around it, honestly."

Walborn said the experience also taught her other valuable lessons and skills that added greatly to her education. She said, "Things like time management were big. And the analysis of the data. I also felt like I was part of something really big because we were studying landscapes that had been owned by presidents and very influential people."

Loeb said he was happy for the help Walborn provided, but even happier to contribute to her education. "I view myself as equal parts scientist and educator, and my duty is to teach students about the processes of science and research," Loeb said. "These interactive projects are the best way to teach them about these processes and how you get results."

Loeb began teaching at Penn State in 1985. He teaches introductory biology, ethnobotany and introductory soil science, including both face-to-face and online sections. Having grown up in the Bronx, he began to work on urban forest research at the New York Botanical Garden at a young age, and Loeb's research interests have their roots in this early experience. His long-standing research program focuses on urban forests and undergraduate students are consistently members of his research team. Awards he has received include recognition as a senior ecologist from the Ecological Society of America, and as a Kenan Fellow of the National Tropical Botanical Gardens. He was also named Educator of the Year at Penn State DuBois in 2013 and was a recipient of the University’s Milton S. Eisenhower Award for Distinguished Teaching in 2015. 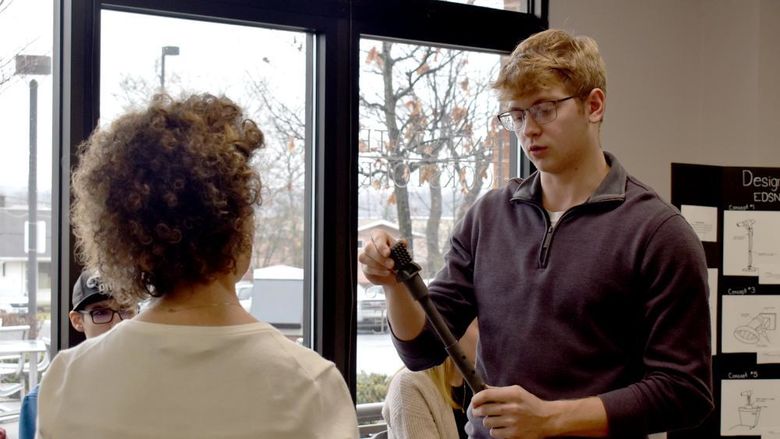