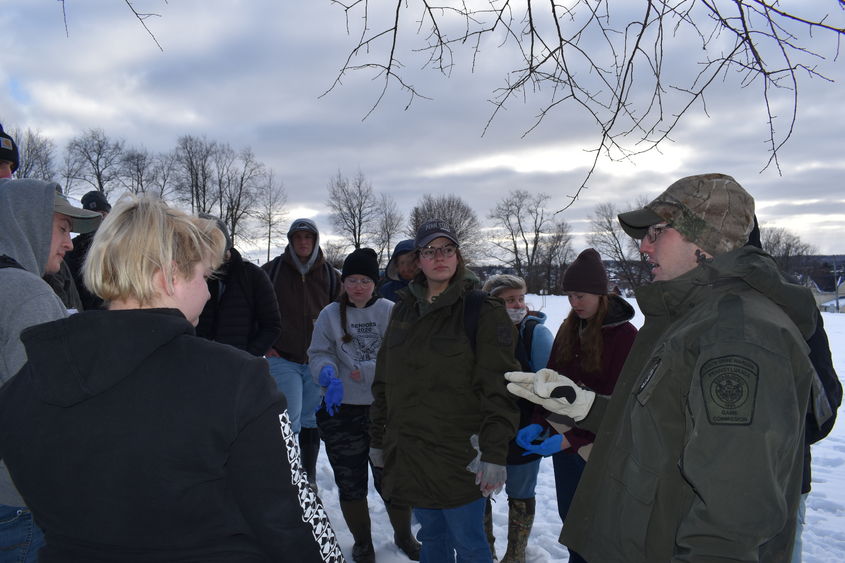 Pennsylvania State Game Warden Thomas Henry, at far right, led Penn State DuBois Wildlife Technology students in a simulated investigation of the illegal killing of a deer.  For student Laurie Enders, center, the exercise offered a glimpse into the career she plans to enter after graduation.

DuBOIS, Pa. — Students enrolled in the Penn State DuBois Wildlife Technology program recently got an inside look at what it could be like working in one of their possible future career paths. Graduates of the program are qualified to work in the fields of wildlife conservation, environmental conservation, wildlife protection and management, game law enforcement, and more. Pennsylvania State Game Warden Thomas Henry, also an alumnus of the Wildlife Technology program, visited campus in January. He spoke about the technology used in modern-day enforcement of state game laws, and led students on a simulated crime scene investigation.

“Technology really works. There is so much of it available in 2022, and we need to use it,” Henry told the students in the class WLT 211, a portion of the curriculum that focuses on the use of global information systems (GIS) and global positioning systems (GPS) in wildlife management. “It’s amazing what technology can do for us today. For example, if I’m out and spot a game violation of any kind, I can program my GPS coordinates right into my watch. Later in the investigation, I can easily return to that exact spot.”

Penn State DuBois Lecturer in Forestry Michael Eckley said he invited Henry to hold this exercise for students because it demonstrates how skills they’ve started to learn about in class can apply to real-life situations in game law enforcement.

“Something like this really helps to drive home the reality of how the things they learn in the classroom apply to the real world,” Eckley said. “It also helps to raise enthusiasm for the kind of work they’ll do when they graduate by seeing just how these methods are applicable.”

To kick off the simulated crime investigation, students listened to a recording created to sound like an anonymous tip from someone who had witnessed the illegal killing of a deer. From the recording, students were asked to gather any information that would be relevant to the investigation. The caller explained that they had seen a person shoot a deer in a field, from or near a vehicle that was stopped on a residential roadway. Many students were able to take from the message an address near the crime scene; the license number and vehicle description; the fact that a spotlight was used in the crime, indicating it happened at night; and more. This gave them the basis to launch their investigation.

Using a global mapping system, students located the address given in the message, and identified an adjacent field, which gave them a place to start. Henry had prepared the scene by placing a deer that had been killed in a vehicle collision in the field, creating a scenario in which the offender had fled before taking possession of the animal. He also left shell casings near the roadway, and footprints in the snow, to replicate a real poaching scene. He then instructed students in mapping the coordinates where the poached deer was found, which would be recorded in files related to the investigation. Henry explained that during a real investigation, game wardens would also go door-to-door, conducting interviews with residents who may have witnessed the incident.

Henry went on to explain that more high-tech investigative methods come into play after the deer in question is fully examined. DNA samples are taken from the animal, which could later be matched to blood on a suspected poacher’s clothes or boots. In reverse, if an animal is taken from the scene, DNA taken from a poacher’s clothes can be matched to meat in an individual’s freezer should investigators collect enough evidence to warrant a home search.

“DNA evidence can be used to identify animals in the very same way it is used to identify people in other types of modern law enforcement,” Henry said. “Through forensic testing, the bullet casings can also be matched to a firearm to positively identify the gun used in the crime. The advancements in technology that we have in the field today give us so many tools that we can use to bring violators to justice.”

Henry also taught students that GPS and mapping programs can be used to easily calculate distance. In this scenario, GPS makes quick work of determining the distance to multiple homes near the crime scene and the precise location the poacher fired from, as determined by the location of the discarded shell casings. This applies to safety zones, which as specified under Pennsylvania law, makes it unlawful to hunt for, shoot at, trap, take, chase, or disturb wildlife within 150 yards of any occupied residence, camp, industrial or commercial building, farmhouse or farm building, or school or playground without the permission of the occupant. Henry surmised that once safety zone violations were totaled, combined with other possible charges including discharging a firearm from a vehicle, hunting at night, hunting out of season, and more, someone convicted of the crime simulated in this situation could face fines of up to $7,000 and a six-year revocation of their hunting privileges.

Students who participated in this lab exercise said the experience was eye-opening. Laurie Enders, a second-year Wildlife Technology student from Ford City, aspires to work in law enforcement for the Pennsylvania Game Commission.

“This is excellent,” said Enders. “We get the lecture on this material, then we get out here and learn how to apply it. It’s so engaging to be out here and see it. It’s invigorating and exciting. I want to apply to be a game warden when I’m done with school, so this really fits my future goals.”

Fellow second-year Wildlife Technology student Ray Cunningham also is interested in a career in law enforcement with either the Game Commission or as a waterways conservation officer with the Pennsylvania Fish and Boat Commission.

“It definitely helps me personally,” Cunningham said. “Seeing it in class, then seeing it in person, connects the dots for me. Having these outdoor labs with professionals also helps to build relationships with the actual agencies like the Game Commission, Fish and Boat, and the USDA. Having those relationships and people who can help to guide you is really helpful when you’re trying to get into the field.”

Henry said he is always eager to help aspiring wildlife conservation professionals, as it was not long ago that he was exactly where the students are today. Henry graduated from the Penn State DuBois Wildlife Technology program in 2016, before being admitted to the Pennsylvania Game Commission’s Ross Leffler School of Conservation in Harrisburg where he trained to become a Pennsylvania state game warden.

“The Penn State DuBois program helped me because it has hands-on experiences like this,” Henry said. “Without the hands-on, I’d be much worse off. Wildlife Technology helped me by going out into the field and learning firsthand about the habitat and the animals. We also learned about communicating with hunters and the public, and how to relate to them. Those relationships are a big part of the job, and without that background it would be a lot harder to communicate with people.”