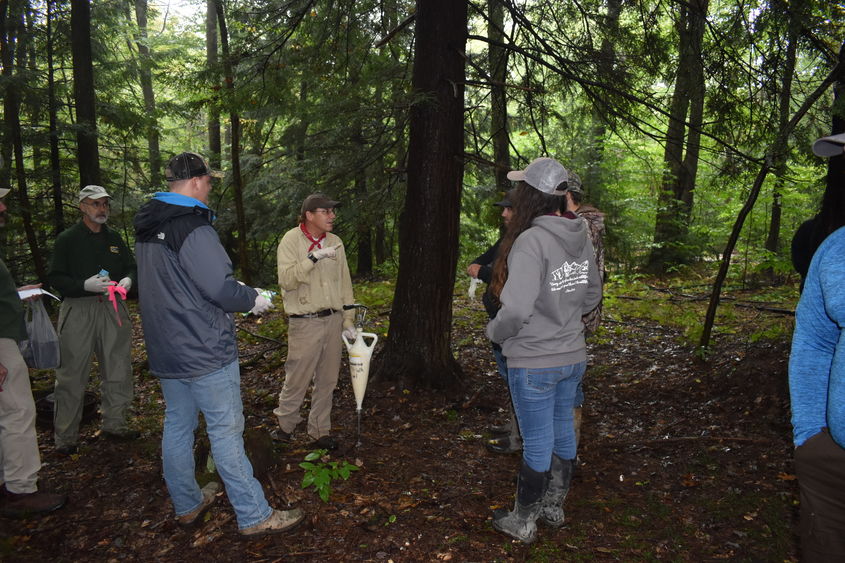 DCNR Forester Bill Laubscher, center, demonstrates the application of insecticide around the base of hemlock trees for Penn State DuBois students. The work students assisted with is intended to protect the trees from the hemlock woolly adelgid, an invasive insect that poses a serious threat to Pennsylvania’s state tree.

DuBOIS, Pa. – The Eastern hemlock was officially named Pennsylvania’s state tree in 1931 for a variety of reasons, from its prominent presence in forests across the commonwealth, to the resources it provided for early setters building cabins. Now, however, the hemlock is under attack by an invasive species of insect known as the hemlock woolly adelgid, which originated in Asia. Penn State DuBois students in Biology 220 are helping conservation professionals with the Pennsylvania Department of Conservation and Natural Resources (DCNR) combat this threat.

The BIO 220 students recently visited Bilger’s Rocks Recreation Area near Grampian, Pennsylvania, where they assisted forestry professionals with treating trees with insecticide to protect them against the insect.

DCNR calls the hemlock woolly adelgid a serious threat to the state’s hemlock forests, with the presence of the insect confirmed in 64 of the state’s 67 counties. DCNR Service Forester Rick Conrad explained, “It’s a serious threat. In North Carolina the insect has destroyed thousands of acres of hemlock forest. We’re concerned that could happen here.”

The insect causes harm to the tree by piercing the tree’s needles and feeding on the nutrient-rich fluids inside. An infested tree can be identified by yellowing needles and cotton-like egg masses on the underside of the needles. Such infested trees often die.

A significant loss of hemlocks in Pennsylvania would be devastating for the environment, foresters say. The trees are a vital source of shelter and food for many forms of wildlife. Additionally, the woolly adelgid threatens another Pennsylvania icon, the state fish, the brook trout. The shade provided by hemlock boughs keeps sun from hitting waterways, maintaining the cool water temperatures necessary for native brook trout to thrive.

But DCNR is fighting back with a Hemlock Conservation Plan. Part of that plan involves treating the trees with insecticide. Forestry professionals mix the solution of insecticide and use a special tool, like a giant syringe, to inject it into the ground around the base of a tree. Moving quickly, the team, including Penn State DuBois students, treated 79 trees during the most recent visit to Bilger’s Rocks.

“We do a soil injection at the base of the tree.  The tree absorbs it and passes it into the insects feeding on it,” said DCNR’s Bureau of Forestry Forest Health Specialist Tim Tomon. “It can be good for four to five years.”

Lecturer of Biology Lola Smith began bringing her students out to participate in this project in 2019. COVID restrictions meant students were unable to participate in 2020, but Smith now plans to make this an annual activity. She said between 2019 and 2021 students have helped to treat nearly 200 hemlock trees. Since many of the student are enrolled in the Wildlife Technology program, this gives them a glimpse at what they might expect if they enter a career in environmental conservation. Smith explained, “This gives them hands-on experience, as well as experience with forest ecology and health. They also get to see what is involved in jobs in forestry and other careers they might be interested in.”

Wildlife Technology student Zane Grimes agreed that these exercises are a valuable learning opportunity. He said, “I think the out-of-class experience adds so much more than just being in a lecture. I’m a tactile learner, so this works for me.”

Fellow Wildlife Technology student Sam Miron said she appreciates the chance to meet people who are working in fields she is interested in. She said, “It’s a lot of networking with professionals in the field, and you don’t find that in the classroom.”

Smith said another advantage to taking on these out-of-class projects is that students are also learning the value of service. She remarked, “The students are giving back to their communities and helping the environment. They’re helping these professionals treat a very real environmental threat.”

According to DCNR, the hemlock woolly adelgid was first discovered in the United States in Virginia more than 50 years ago. It has since spread to 17 states with widespread hemlock mortality reported in Tennessee, North Carolina, West Virginia, Virginia, Pennsylvania, Connecticut and New Jersey.

Additional information about the hemlock woolly adelgid, DCNR’s conservation plan, and tips for homeowners are available at the DCNR website.