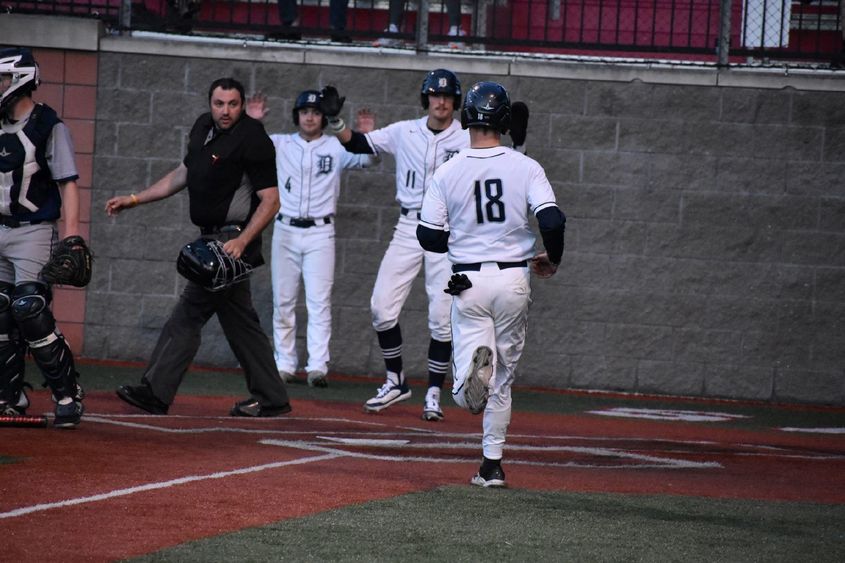 Lizzy Scott, pitcher for Penn State DuBois, with shortstop Skylar Ceprish in the background during their first game in the USCAA Small College World Series.

Constant mist and rain made play challenging for both teams to start the day. In the bottom of the second inning, DuBois players loaded the bases on three walks, with no outs, before walking in the first run for DuBois.

After Carlow scored four runs in the first two innings, DuBois' Paige Pleta made a fantastic catch at third base in the top of the third to end the half inning, holding Carlow to no additional runs. Pleta led off at the plate in the bottom of the third, hitting a double for DuBois to right field. Kelsey Stuart hit a single to right center, bringing in an RBI. Kaleigh Huffman followed suit, bringing in another run to tie the game 4-4. Jordan Bundy continued the trend of hits to right field with an RBI to put DuBois ahead of Carlow 5-4 and force a pitching change.

Carlow scored four more runs in the top of the fourth inning to take the lead back from DuBois, and that would be the difference, as DuBois would get shut out offensively for the remaining three innings.

With Carlow leading 8-5 in the top of the fifth, DuBois changed pitchers to Brianna Bone, a freshmen from Morrisdale, before she moved to right field later in the inning, making a great catch for the third out. DuBois continued to struggle through the rest of the game with three pitching changes, finishing with a final score of 20-5.

Penn State DuBois softball will play again at noon on Tuesday, May 17, in an elimination game. 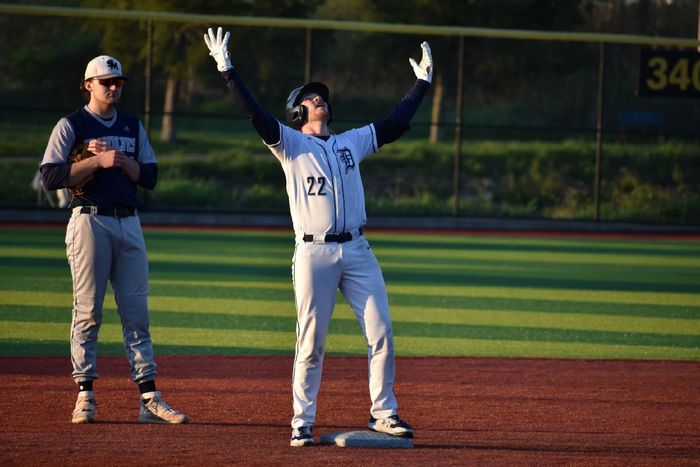 Penn State DuBois baseball defended its 2021 USCAA Small College World Series title with its first game against Southern Maine Community College (SMCC) at Showers Field on Monday evening, May 16. Penn State DuBois received a bye as the No. 1 seed, and SMCC won game two to earn a place in this game.

Taylor Boland started on the mound for DuBois, striking out two, one thrown out at first, and a single home run by SMCC. Trevor Hanna hit a double in the bottom of the second, and Brandon Sicheri immediately followed suit with another double to earn two RBIs. Brett Beith joined his teammates and hit a single for an additional RBI. Colby Bodtorf and Dan Stauffer each sacrificed an out for two additional RBIs before ending the second inning with a 5-1 lead.

In the third inning, after two outs, two walks, and a hit-by-pitch, DuBois' Thayne Morgan hit a grounder to second that was mishandled, bringing in another run. Bodtorf hit a three-run double off the center field wall later in the inning and Stauffer hit a single with an extra base to bring in Bodtorf, bringing the score in the bottom of the third to 10-2.

Cole Knable came in to pitch for DuBois at the top of the fourth inning. A diving stop by Bodtorf at shortstop resulted in a quick throw to second for an out and then to first for a double play.

Braiden Blair stepped up to the mound at the top of the fifth as SMCC loaded the bases with no outs. DuBois cut the inning short,  however, only allowing a single run. The bottom of the fifth inning brought a rain delay, pausing play for approximately 30 minutes.

Jeff Romano closed out the game with a final score of 10-3. Penn State DuBois baseball will play again on Tuesday, May 17, in the winner’s bracket at 6:30 p.m. against Miami Hamilton or The Apprentice School at Shower’s Field.