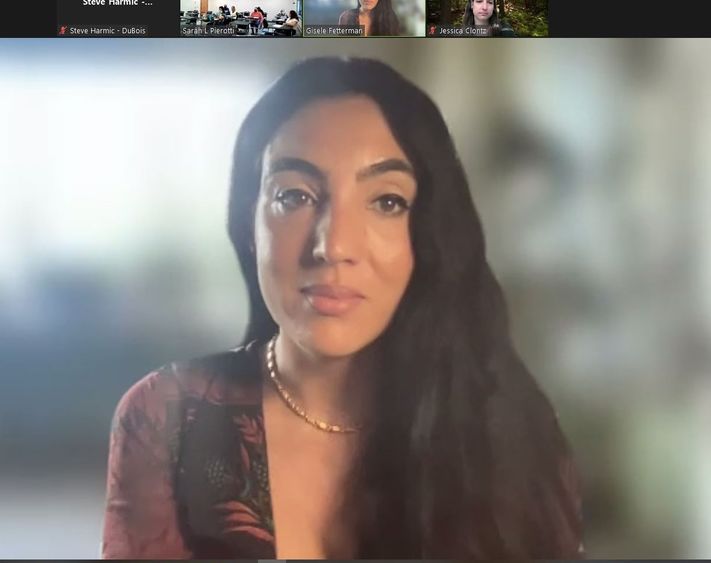 Gisele Fetterman spoke to Penn State DuBois students via Zoom about issues faced by Latino families in the Unites States.

DuBOIS, Pa. — Students in the Penn State DuBois Human Development and Family Studies (HDFS) program had a unique opportunity on Oct. 12 when Pennsylvania’s second lady Gisele Fetterman paid them a virtual visit via Zoom. Having immigrated to the United States from Brazil when she was 7 years old, Fetterman is an activist for immigration reform. She visited with students in the class HDFS 397: Latino/a Families, a special-topics course addressing unique issues faced by Latino families in the U.S.

“The goal is to expose students to the research we have specific to Latino populations,” said Sarah Pierotti, assistant professor of human development and family studies. “It’s vital because that population is growing, and a big part of our job in the HDFS major is to teach students to work with all members of the community and to help provide solutions to social issues for all members of the population.”

The wife of Lt. Gov. John Fetterman, Gisele Fetterman has pursued her passion for helping others through endeavors such as founding the Free Store in Braddock, Pennsylvania, a nonprofit that provides low-income families with clothing, furniture, household items, baby care supplies, toys and more. In 2015, she co-founded 412 Food Rescue to provide food to families in need. The nonprofit redistributed 2.5 million pounds of food in its first two years.

Fetterman continues to appeal to the United States Congress for immigration reform, inspired by her own early experiences as an immigrant. She shared many of these experiences with HDFS 397 students to help them better understand the issues they are studying related to Latino families, and the struggles these families go through as they begin lives in a new country.

She shared that dangerous conditions in her home of Rio de Janeiro, Brazil, forced her mother to make a hard decision to relocate her young family.

“The boiling point for my mother was when she was having dinner with my aunt,” said Fetterman. “My aunt said she had only been robbed seven times that year. It wasn’t the number that struck her, but the acceptance. She didn’t want my brother and I to grow accepting that as normal.”

With the safety of her children as the top priority, Fetterman’s mother, a Ph.D.-level nutritionist for hospitals in Rio de Janeiro, moved her family to Queens, New York. Unable to transfer her degrees in order to find similar employment in the U.S., she became a domestic worker.

“She ran hospitals, had a great career, and immediately overnight she’s now a domestic worker, cleaning hotels and homes, and she never looked back,” said Fetterman. “She said she would clean toilets for the rest of her life knowing that we’re safe. It’s not for everyone. It’s not an easy path.”

Fetterman herself struggled as a child to acclimate to life in the U.S. Speaking no English when she arrived in Queens, she attended public school, adapting to her new home by any means possible.

“Mr. Rogers taught me English,” Fetterman recalled. “I watched him with closed captioning on, and I recommend him for anyone learning English — his delivery, his speech was so great. Reading the words and hearing him say it really helped me learn.”

Relating these personal accounts is one way in which Fetterman hopes to help close social divides and create understanding by helping people to realize the struggles others have endured.

“No one learns by being shamed,” she said. “Growth happens through conversation. You can’t hate someone you don’t know — I can’t accept that.”

Pierotti said these messages will go far in helping her students to relate to the individuals they’ll work with in their careers as social workers, counselors, behavioral specialists, and more. She was grateful that Fetterman was willing to make time for the class, saying, “It never hurts to send an email. I reached out and asked if she would be willing. She wrote right back and said she would be honored to.”

Fetterman told the students, “I think any work that helps make the world smaller is important, and that’s some of what you’re doing here.”

Pierotti created the Latino/a Families HDFS course from scratch, and it is currently offered exclusively at Penn State DuBois.  She is currently working on curriculum for a Latino studies minor that she hopes will be offered at other campus locations, as well as at DuBois.