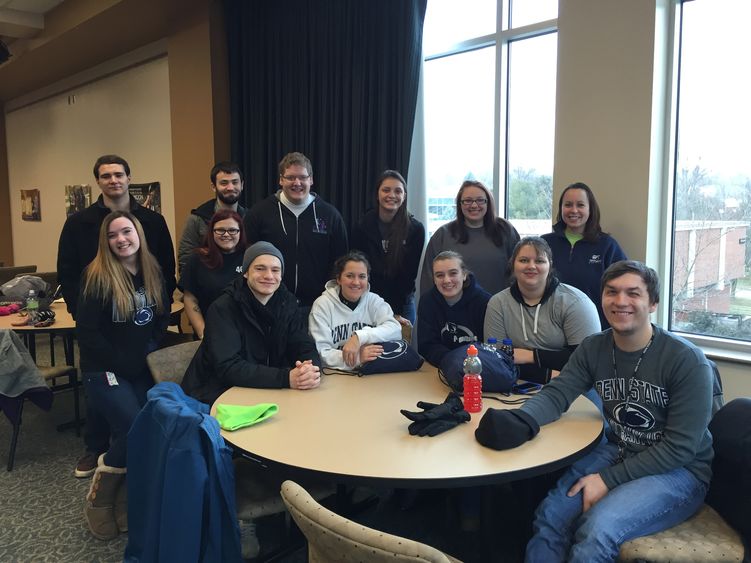 A group of 12 Penn State DuBois students participated in a Martin Luther King Jr. Day tradition on Monday, choosing to take part in the MLK Day of Service, rather than taking the day off. They were part of a group nearly 100 students strong, from seven Penn State campuses including Behrend, Beaver, Shenango, DuBois, Greater Allegheny, Fayette, and New Kensington.

Each year, the community of one of the campuses is chosen for the MLK Day of Service, and students volunteer at various organizations in that community in honor of Martin Luther King, Jr., and his dedication to serving others. This year, Penn State Greater Allegheny was the host campus, placing students at service sites around McKeesport and the surrounding communities. Sites included Braddock Day Care, McKeesport Little Theatre, Auberle, The Palms Assisted Living Home, Braddock Library, Braddock Free Store, White Oak Borough, and White Oak Park.

Penn State Greater Allegheny Instructor in History Jonathan White served as speaker for the kickoff of the event, inspiring the volunteers before they traveled to their service sites. Penn State DuBois Assistant Director of Student Affairs Marly Doty, who accompanied the DuBois students as their facilitator, recalled, "The kickoff speaker for the event, Jonathan White, said it best. He said, 'It’s not about a day of service, but a lifestyle of service.' That stuck with me. These students aren’t just volunteering for the day but incorporating service as a part of their lives. They want to connect and change the world around them in a positive way."

This is the eighth year Penn State campuses have participated in the MLK Day of Service. Martin Luther King Jr. Day was first observed in 1986. In 1994, congress designated the holiday as a national day of service, charging the Corporation for National and Community Service with leading this effort. Martin Luther King Jr. Day is the only national holiday designated as a national day of service.