Campus men 'Walk a Mile in Her Shoes' 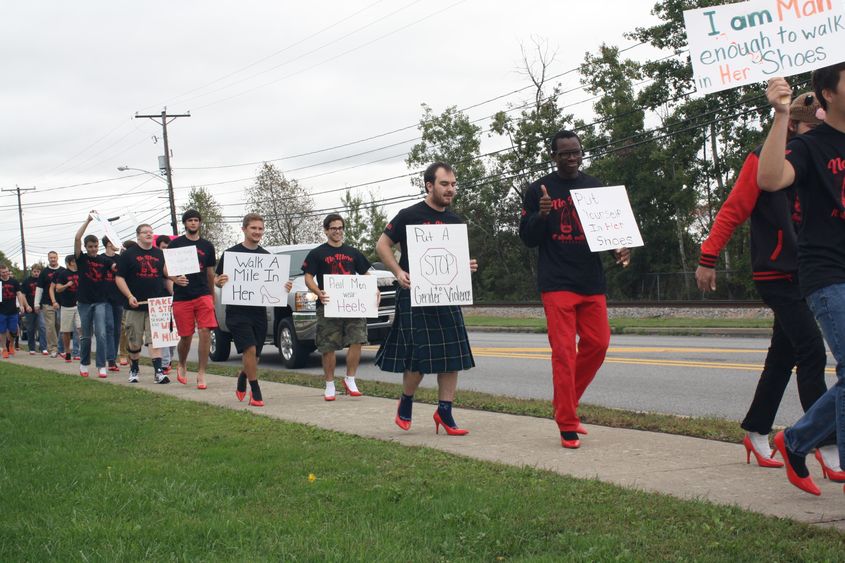 Men in high heels walk along Route 255 near Penn State DuBois campus during the "Walk a Mile in Her Shoes" event.

More than 40 Penn State DuBois men wore high heels for the "Walk a Mile in Her Shoes" event on Wednesday, Sept. 30. The men's march is meant to raise awareness of the battle against rape, sexual assault and gender violence. The event was organized by victim advocacy group Passages of Clarion, Clearfield and Jefferson counties, in conjunction with the Penn State DuBois Office of Student Engagement. The idea behind the march is to get men more involved in issues surrounding sex crimes.

The men marched through campus, as well as off campus and down Liberty Boulevard, then back, covering a full mile in their pumps.

April Fleck, a prevention educator with Passages, said encouraging men to take a stand against issues surrounding sex crimes is a significant part of raising awareness. She said, "Particularly for men, it's important. Men often can prevent sexual violence. Getting men involved makes a difference, and decreases the amount of abuse that occurs."

According to the Rape, Abuse and Incest National Network (RAINN) someone is sexually assaulted in the United States every two minutes. Statistics like that are what inspired some of the marchers at the "Walk a Mile" event.