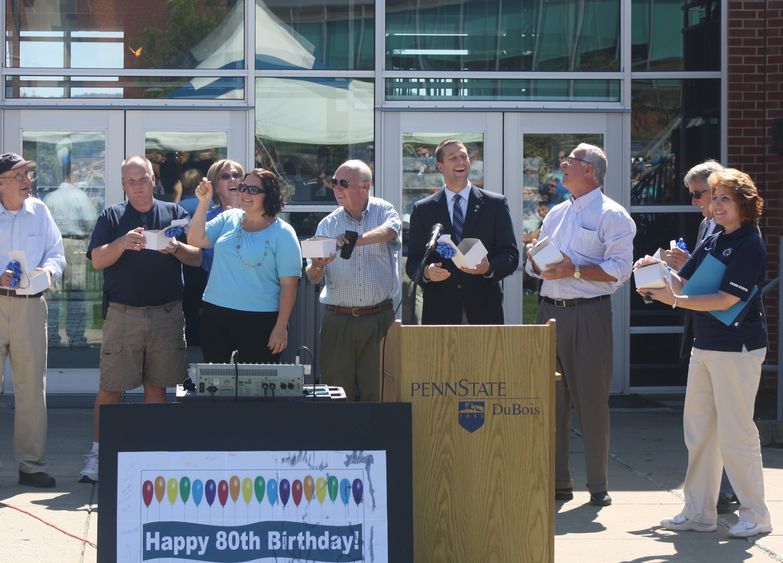 Under the beating wings of eight monarch butterflies released from the campus monarch nursery, Penn State DuBois officially turned 80 years old on Friday, Sept. 18. The campus community celebrated the milestone with a birthday party and picnic on the campus lawn. The occasion was especially marked by the butterfly release, one monarch for each decade, as they were the first specimens to be released from the on-campus butterfly nursery, which is an effort to help restore endangered world populations of the monarch.

"This institution has been a driving force for our communities; this campus has been such an important part of our region," Gabler said. "It is my honor to congratulate Penn State DuBois on proudly providing eight decades of quality education to our communities."

Those eight decades began on Sept. 18, 1935, when the DuBois Undergraduate Center of the Pennsylvania State College first opened its doors in the old Hubert Street School in DuBois. Hatch shared more of the campus' history with guests, thanking friends of the campus for providing support that has allowed Penn State DuBois to thrive through the decades. Hatch said, "A great deal has changed since the campus first opened its doors, but one thing that has remained the same is the fact that this institution continues to serve our communities thanks to our alumni, donors, students, faculty and staff, who have made a commitment to the success of Penn State DuBois. And each of you make that commitment because you believe in the need for quality education in your community."

The family of John E. DuBois donated the DuBois Mansion and grounds to Penn State in 1937, at which time the DUC, as the center came to be known, moved into the old mansion. The campus remains on the DuBois grounds today.

But as the 1940's dawned, Hatch explained, growing turmoil in Europe and the Pacific eventually drew a majority of America's young men to serve in World War II. It was a different world then, and most college students were young men.  This left the old mansion halls virtually empty of students, as most of them laid down their books, and picked up their rifles to head off to war. The DuBois Center was closed in 1944.

Once again, however, the community stepped in to keep the institution alive.  Local leaders like Patrick Swift, for whom the campus' Swift Building is named, went on to form the DuBois Educational Foundation to support the center.  The DEF remains today the campus' advisory board, and is the namesake of another one of the buildings on campus.

When the veterans of World War II returned, they brought with them the G.I. Bill, and enrollment soared to what was unprecedented levels at the time.

Hatch went on to fill in the more recent history of the campus, explaining that those pioneer alumni from the 1930's and 40's handed down their appreciation for Penn State DuBois, from generation to generation, forming a support network that has helped to keep the campus a center for education in Central Pennsylvania. She said, "A lot really has changed since 1935. We have state-of-the-art classrooms and labs, world class faculty, and staff members, and alumni who have gone on to find success in the world's most significant industries. Loyalty and friendship among those who learned here, however, has not changed in the least.  An appreciation for the importance of education is still here today, as it has always been. And that's why I'm sure in another 80 years, another chancellor will be here expressing their appreciation."

Today, students at Penn State DuBois can complete one of 16 degrees programs offered in entirety at DuBois; or they can complete the first two years of course work for nearly 160 Penn State degrees that can be earned at other locations throughout the state.