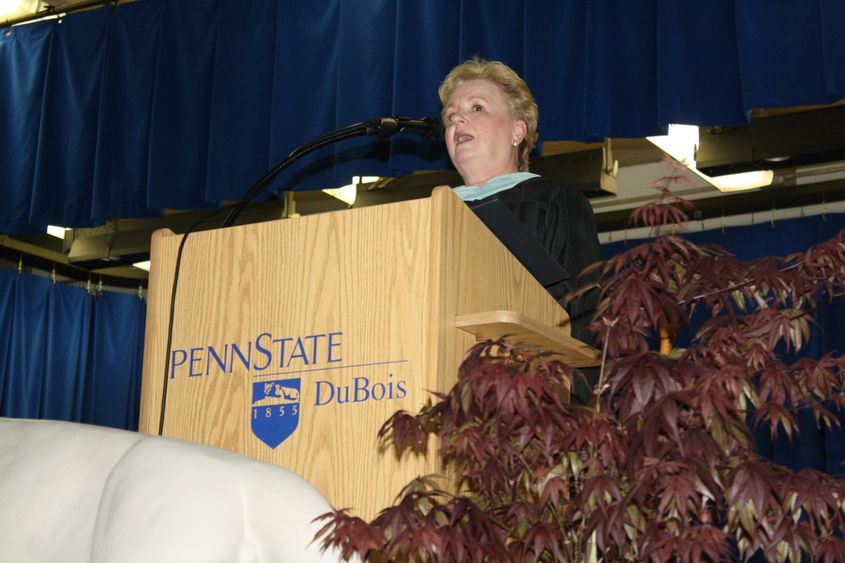 Educational consultant Lois Richards offered advice on life and learning during her address at spring commencement ceremonies at Penn State DuBois on May 9.

A Penn State DuBois alumna who dedicated her career to educating others shared her story as well as advice for new graduates at Penn State DuBois commencement ceremonies May 9. Lois Richards was the guest speaker for around 50 students participating in the ceremony, held in the campus gymnasium. Richards was the first female director of the Clearfield County Career and Technology Center, a position from which she retired in 2013 after 25 years with the institution. She currently serves as a consultant for the Pennsylvania Department of Education.

"Congratulations to the Class of 2015. What an accomplishment that you are celebrating today," Richards said.  "There are others who are celebrating with you; people who have supported you, encouraged you and maybe even motivated you. They should be thanked and recognized. So to the administration, faculty, staff, parents, grandparents, significant others, friends and other invited guests, thank you for all you have done to help these graduates reach this important milestone in their lives."

Richards then offered inspiration for the new graduates by telling the story of how she was able to lead a significantly accomplished career. Making it clear that the route she took was anything but conventional, Richards' story is especially relevant at Penn State DuBois, a campus with a large returning adult student population.

"At the age of 32, with three elementary age children, a husband, a house to care for and some community commitments, I applied to Penn State DuBois and started classes in January 1986," Richards recalled, saying that with all three of her children entering school at that time, she knew she could focus on other areas in addition to her role as a stay-at-home mom.

With much encouragement from family and friends who assured her she would be a great teacher, Richards set her sights on a degree in education. She remembered the disheartening experience of receiving a poor grade on her very first quiz, an event that almost made her give up. Fellow students as well as her husband reminded her that she wasn't a quitter and kept encouraging her to realize her dream. She passed on that same advice to new graduates during her commencement address, reminding them to persevere through the hard times, and good things can happen. She said, "So, four years later, on Jan. 6, 1990, at the age of 36, I stood on the stage at University Park, graduating with a bachelor of science degree and proudly representing the College of Education as the student marshall."

Just a few days after graduation, Richards was offered a job at the Clearfield County Career and Technology Center in adult education, where she would rise through the ranks to become director. Along the way, she earned her master's degree in workforce education and development from Penn State. She participated in commencement for that degree at Penn State DuBois in 2002, alongside her daughter, Carrie Wood, who graduated at the same time with her master of business administration degree. Richards and her daughter have both been active with the Penn State DuBois Alumni Society in the years since.

A consummate educator, Richards provided advice for graduates, gleaned from the journey she had taken from stay-at-home mom to educational consultant for the Commonwealth of Pennsylvania.

"Second, commit yourselves to character. Character has to do with the principles you live your life by: Honesty, integrity, courage to always do the right thing no matter what the consequences are, personal responsibility; that is the kind of character the world needs from each of you. And don’t forget that old saying: True character is doing the right thing when no one is watching.

"Third, commit yourselves to service to others. You may often hear that our country is in need of great leaders, but what we really need are great servants; people who serve others, not themselves. Individuals who volunteer their time in their communities will have the greatest impact on others’ lives and, in the process, add meaning to their own lives. Success is not measured by what you get out of life, but by what you give back.

"The fourth and final suggestion is to become a life-long learner. As each of you walks away from Penn State DuBois today, don’t let your education stop here. To be successful in the future, you must, above all, be willing to continue to learn. Just ask any employer."

Richards concluded her address by saying, "As I shared my story with you earlier, it is never too late to obtain a college degree or learn a new skill. Cherish and celebrate the moment today and be very proud of your accomplishments, but also remember the majority of your life is ahead of you. The world is a large and wonderful place and now is your time to step into it. Take your education into the world, commit to a life of excellence, character, service and lifelong learning, and you will surely achieve all the success that you deserve. "